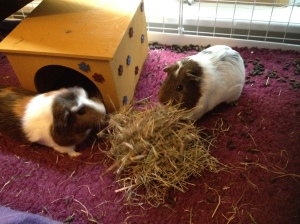 I’m not the world’s most natural pet owner. I’ll confess (though someone who loves animals more than I do, might get upset) that I got our little guinea pigs as part of my recovery. It felt important to have something to wake up for in the morning, and something to give me some routine. To that end, they have been marvellous – no matter how awful I feel, I have always managed to pull myself out of bed, or off the sofa to give them what they’re squeaking for.

Guinea pigs are shy, though, and I have learned a lesson in that, too. They love me as much as any pet loves its owner (I am the bringer of greenery!) but they don’t need me – not me, personally – and that ‘rejection’ has helped me a great deal, too. An illustration for life, and all the relationships I have. I have a lot of people that love me, but I will never find someone who just can’t live without me (though God Knows I’ve tried over the years) because that just isn’t healthy, or sane. Guinea pigs taught me that. (I hear most people learn it some other, normal, way – but there you go).

One thing I can do for my little friends, though, is give them a home that they will love. Their cage has evolved a lot over the last year – within months it looks dingy and chewed up, so we go back to the drawing board and revise it. For a while they had a mansion, all carpeted and wall-papered. I liked it, but it was a bugger to clean.

Not only that, but they loved to chew the walls. And, eventually, they never left that little section underneath the second floor, except to eat…

The amount of space this baby took up in our tiny little second bedroom, started to seem a little silly – and Spring is all about simplifying, so I redesigned (and roped the Husband into doing some manual labour).

It’s a simply, one storey wooden design, that frees up more space in our room, without the pigs losing too much running room. They still come out and run around regularly, so the ‘cage’ only needs to be big enough for the rest of the time. Some of my friends were a little worried that Frida and Audrey might jump over the sides. To them, I said “Yeah, you don’t know my girls… they’re not going to do any jumping”. Frida still stands on her back legs and pokes her head over the side when she hears the fridge door, but otherwise, they’re quite incapable of getting that high. 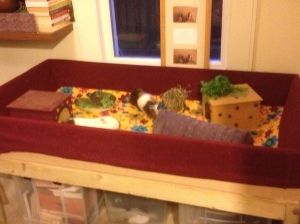 Only a few things need to be done, now. You’ll see there’s no water bottle in the picture. Taking away the cage walls, means we’ll have to rethink how to hold up their water bottle. For now, we’ve rigged it up to an old cube grid, but it looks pretty dire. Any ideas would be gratefully received!

“When I die, there will be no proof that I ever was a writer” Franz Kafka

To die, never having written anything of worth; to live, never having shared the way I see the world; to dream without ever realising those things I hold dear... these are my biggest fears. And so I write. Not for you - though it means a lot that you would read my words - but for me. So that when I die, there will be something to ask you to destroy.