When we bought the house, I suppose we thought that one day the tiny second bedroom would make a good nursery. But God seems to  be holding out on that particular blessing for the moment (and given the year I’ve had, I think I’m with him). So we agreed it would be a good place to house the other new additions to the family that we’re planning.

I was really stuck on the idea of getting a dog. But after much discussion (I think the husband started to think he was having a conversation with a very small child) we agreed that a dog was just a little too much work. For a start, you simply can’t leave a puppy alone in a house for the amount of time I’m out at work, even if it is only three days a week. I looked into Doggy Day Care, which I know a few friends use, but the price of it almost made it easier to quit work and stay at home! Also, whilst I like to imagine I’d happily get up in the night for a crying baby, I’m not so keen on a whimpering puppy losing me my sleep. So, we agreed on Guinea Pigs.

A lot of my facebook friends had things to say on the topic. But I’ve lived with my fair share of rats in the past, and so they weren’t an option. Hamsters, too, freak me out a bit too much. Too small.

One of the best ways to keep Guinea pigs (or Cavies, for their Latin name Cavia porcellus) according to those in the know, is in a home-built cage. The ones you buy at the pet shop are tiny and, if you want to keep them in the house as we have decided to, far too difficult to clean out, too. So, I did some research into what they call C and C cages (Cubes and Coroplast), and ordered some pieces on the internet from the few UK companies that seem to stock such things.

The grids (or cubes) arrived this afternoon from Grendle Entertainment. 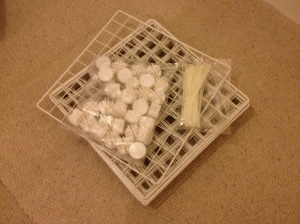 They come in packs of 26 grids with connectors and cable ties. The holes between in the grids are just under 1.5 inches – which makes them safe for little guinea pigs, no strangling and no escaping.

At first, I used the connectors to attach the grids together, but they seemed clumsy and left space between each of the grids that made me a little nervous. So I took advice from other Guinea pig owners who have made such cages and chose to use the cable ties only. 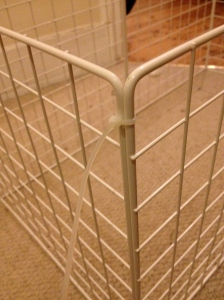 The cage will eventually be a two-storey affair. The bottom part is 2×4 (each grid is 14inches). The top storey is 1×2 and should be good for feeding them, or just giving them hay to play with. This storey will be reachable by a ramp – not too steep or the little fellas won’t be able to climb it. 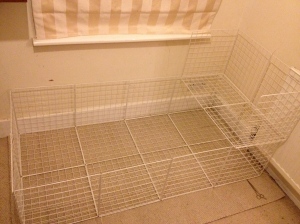 The ‘cage’ can stay open topped as, I’m promised, guinea pigs don’t climb. And, as long as you don’t have other animals in the house, they are quite safe without a roof.

Eventually, the cage will need to be raised from the floor in some way, guinea pigs don’t much like being on the floor – they’re a little scared by giant humans clomping around… and given that humans still eat them in some places, I don’t really blame them.

The next ‘c’ of the ‘c and c cage’ after these cubes is ‘Corroplast’ or, in the UK, that corrugated plastic stuff you make signs out of. That proved a little harder to get hold of (without buying it in bulk) but I think I have some on the way. It’ll need to be cut into boxes the size of the lower cage and the Hay Loft. I’m not really looking forward to that bit, it sounds a little complicated… but I’m sure I can persuade the Husband to help out if needs be.

See some funky C and C cages here. I’ll keep you updated on the other exciting decorating plans I have for the Castle (and let you know when we actually have someone to live in it!).

“When I die, there will be no proof that I ever was a writer” Franz Kafka

To die, never having written anything of worth; to live, never having shared the way I see the world; to dream without ever realising those things I hold dear... these are my biggest fears. And so I write. Not for you - though it means a lot that you would read my words - but for me. So that when I die, there will be something to ask you to destroy.